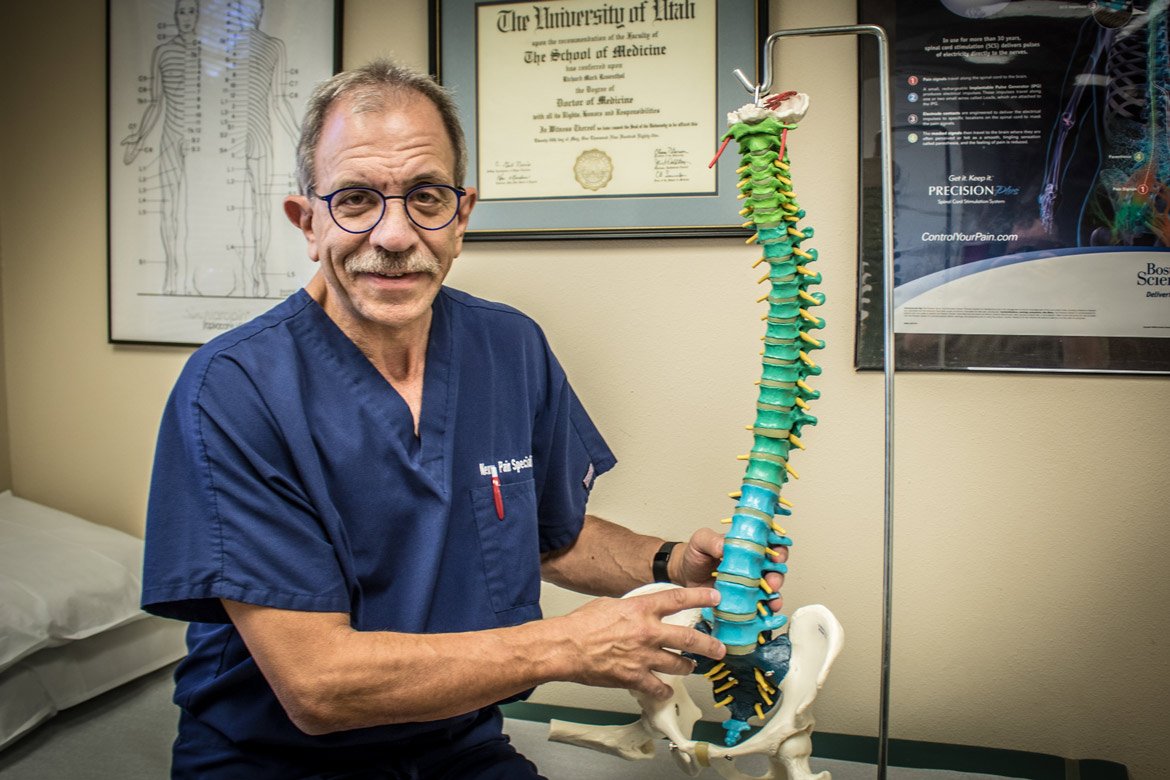 Richard Rosenthal, M.D. is board certified in Anesthesiology, Pain Medicine, Addiction Medicine and Interventional Pain Medicine. He graduated from the University of Utah School of Medicine in 1985. In 1993 he graduated from an anesthesia residency at the University of Texas at San Antonio Medical Center. He is the Founder, President, and Medical Director of Nexus Pain Specialists.

Dr. Rosenthal has distinguished himself as a leader in educating and training medical professionals in the fields of Interventional Pain and Regenerative Medicine. He is the editor of the interventional pain section of the widely read journal, Practical Pain Management.  He developed a one year pain medicine fellowship which teaches young physicians a variety of skills in Interventional Pain and Regenerative Medicine. Dr. Rosenthal is a master instructor for the prestigious Spine Intervention Society.  He has taught physicians in both the United States and Europe how to correctly perform various spinal procedures.  He has authored several scientific articles and book chapters on topics in the specialty of pain medicine. He is also involved in clinical research and has served as an expert witness in malpractice cases. His clinic was awarded the Excellence in Multi-disciplinary Pain Care Award by the World Institute of Pain (one of only 4 clinics in the United States to receive the award in 2011).

Dr. Rosenthal has been practicing Regenerative Medicine for the past several years. He has acted as Course Director for more than 25 Regenerative Medicine courses and has lectured at national conferences.  He specializes in the use of stem cells and platelet rich plasma for the treatment of painful joints, including the knee, hip and shoulder. His treatments are based on a comprehensive approach to relieve pain and improve function.  Dr. Rosenthal has lectured on the topic of Regenerative Medicine, especially Platelet Rich Plasma and Stem Cells treatments, for such prestigious organizations as the American Society of Interventional Pain Physicians and the Society for Pain Practice Management.

2005-Present. International Spine Intervention Society Education Committee member: I have played an active role on the Spine Intervention Society (SIS) Education Committee in the evaluation and selection of prospective instructors, I have acted as a Course Director. I have also written Emergency Protocol procedures which have been adopted by SIS, and I continue to work on the development of instructional materials and guidelines.

International Spine Intervention Society, Senior Instructor. My teaching involves the training of practicing, board certified physicians in Interventional Pain with the main focus on diagnostic and therapeutic spinal injections, and spine interventions, utilizing fluoroscopy. This includes precise needle placement in and around the spine, as well as the interpretation of fluoroscopic imaging.

Recipient Multi-Disciplinary Clinical Pain Practice Award from World Institute of Pain. The World Institute of Pain (WIP) Excellence in Pain Practice (EPP) Award is an award given in recognition of specific criteria established by WIP and an inspection of the pain center by a WIP representative at the invitation of the director of the pain center. The award is presented in recognition of excellence in pain management and training of physicians, and is granted for a five year period.

Consultant, Medical Equipment Companies (Stryker, Boston Scientific, Neurotherm). I am a consultant for medical equipment companies and act as a mentor to proctor doctors.

The following is a list of publications that Dr. Rosenthal has written or contributed to:

Certain publications are not able to be given out as they are owned by the publisher. In particular, the following book chapters:

We are committed to making our website ADA compliant. Read our accessibility statement